Her comments came after Prince’s string of bombshell interviews and ahead of the release of his tell-all memoir Spare, which came out on Tuesday – having been leaked days ahead of its official release date.

Harry has spilled a slew of personal details about the British Royal Family and how he and his wife Meghan were treated, and made accusations against them – such as claiming his brother William pushed him to the floor in an argument.

Speaking on Good Morning Britain (GMB) on Tuesday, Judge Judy suggested that while her comments were not directly about the Duke of Sussex, she would be ‘furious and hurt’ if her child or grandchild did the same as Harry had done.

Scroll down for videos

American television personality Judge Judy has slammed Prince Harry as being ‘selfish, ungrateful and disingenuous’ in an interview with ITV (pictured)

‘I will tell you that I would be furious, and I would think that child or that grandchild was a selfish, spoiled, ungrateful one,’ Judy, a former Manhattan Family Court Judge whose real name is Judge Judith Sheindlin, said.

‘That’s what I would feel. I’d be really hurt, I think anybody with a brain would see that it’s disingenuous, it’s biting the hand that fed you, it’s unseemly.’

GMB host Noel Phillips repeated that Judge Judy had refused to comment directly about Harry and Meghan, but anchors Susanna Reid and Richard Madeley said from the studio it was clear that she was referring to the couple, and Harry in particular.

‘Judge Judy doesn’t hold back on her verdict does she… blimey!’ Medley said.

Reid chimed in, saying: ‘She said she wouldn’t specifically talk about what she thought about… blimey. I think we were left in no doubt.’ She added: ‘Selfish, spoiled, ungrateful and unseemly… but she doesn’t want to comment.’ 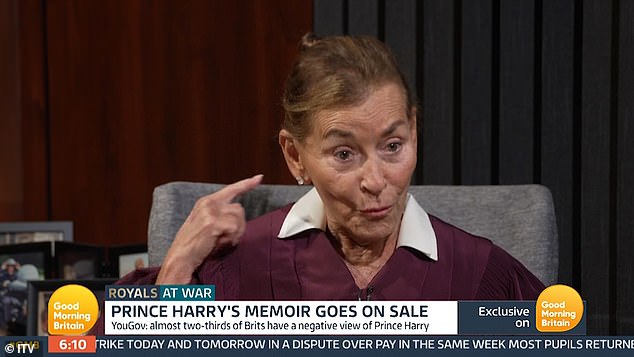 Speaking on Good Morning Britain (GMB) on Tuesday, Judge Judy (pictured) suggested that while her comments were not directly about the Duke of Sussex, she would be ‘furious and hurt’ if her child or grandchild did the same

After days of TV interviews, leaks, and a mistaken early release, Harry’s memoir officially went on sale on Tuesday and eager readers headed to bookstores to get their copy with its intimate revelations about the British royal family.

Harry’s book ‘Spare’ has garnered attention around the world with its disclosures about his personal struggles and its accusations about other royals, including his father King Charles, stepmother Camilla and elder brother Prince William.

There were piles of copies of the book in some London stores and the memoir currently ranks as the best-seller on Amazon’s UK, US, Australian German and Canadian websites.

‘Spare’ is the latest revelatory offering from Harry and his wife Meghan since they stepped down from royal duties in 2020 and moved to California to forge a new life, and follows their Netflix documentary last month. The royal family has not commented on the book or the interviews and is unlikely to do so.

Extracts from the book were leaked last Thursday when its Spanish language edition also went on sale by mistake in some bookstores in Spain.

Harry speaks of his grief and growing up after the death of his mother Princess Diana when he was just 12, his use of cocaine and other drugs to cope, how he killed 25 Taliban while serving as a soldier in Afghanistan, and even how he lost his virginity. 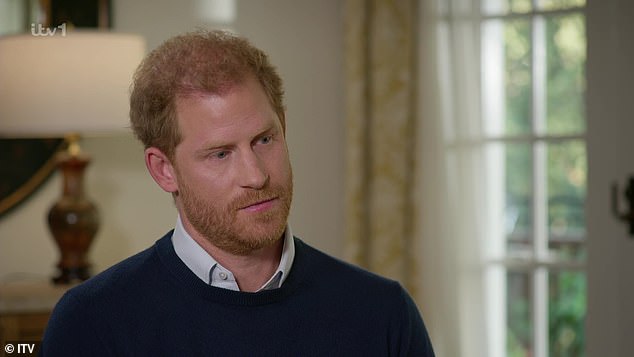 Harry has spilled a slew of personal details about the British Royal Family, such as claiming his brother William pushed him to the floor, in a round of interviews ahead of his book launch 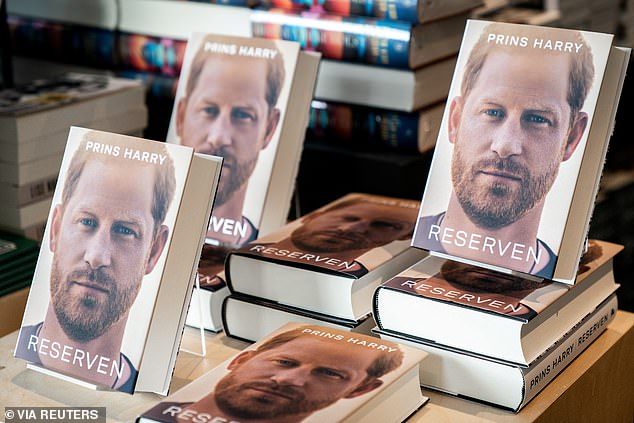 After days of TV interviews, leaks, and a mistaken early release, Harry’s memoir officially went on sale on Tuesday (pictured in the UK) and eager readers headed to bookshops to get their copy with its intimate revelations about the British royal family

He also reveals a heated row with William, the heir to the throne, saying his brother knocked him over, and how they had both begged his father not to marry Camilla, who he married in 2005 and is now the queen consort.

In TV interviews ahead of the book launch, Harry doubled down on his accusations that some royals, including Camilla and William, leaked stories to tabloid papers which had damaged either him or his wife Meghan in order to protect themselves or enhance their reputations.

‘I think she (his mother Diana) would be heartbroken about the fact that William, his office, were part of these stories,’ he told Good Morning America (GMA).

In another interview with CBS show 60 minutes, he said Camilla had been a tabloid ‘villain’ and needed to rehabilitate her image, which made her ‘dangerous’.

‘I don’t regard her as an evil stepmother. I see someone who married into this institution and has done everything that she can to, you know, improve her reputation and her own image,’ he told GMA.